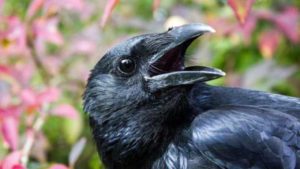 Getting back to that crow i heard (Phenoscopy 2):

Actually i’m only guessing that the sound i heard came from a crow. For all i know, it could have been made by some other animal, or could even have originated inside my head, or in my ears, like the constant rhythmic swishing sound of my blood in circulation. (Apparently most people don’t hear this all the time, as i do, but you can probably imagine what i mean.)

What i can say for sure is that the sound was an event in a universe of events. This makes it different from a color, for instance, which is not an event like a flash of light or a sudden change of color (say from red to green). A sound is inherently temporal, while a color, abstracted from any colored object, is eternal.

Theoretically, of course, we can say that both sounds and colors are vibrations whose frequencies account for their perceived qualities, and vibration necessarily takes time. We humans are always trying to explain things in this way, just as i explained the sound i heard by making a hypothesis that a crow made it. But explanations are signs, and highly complex signs at that. The sign is a very different phenomenon from a sound, or a color, as experienced. Signs inhabit a universe that is both qualitative and temporal: they don’t function as signs unless they are interpreted, which takes time. Any functioning whatsoever takes time as well as place.

To actually experience the pure quality of a sound, you have to set aside all such explanations. Try listening for awhile to the sonic universe, the audiverse, without trying to name the sounds according to (your guesses at) their causes. This forces their Firstness and their Secondness to the foreground while relegating their Thirdness (and any meaning they might have) to the background. (The Canadian composer Murray Schafer called this ‘ear cleaning,’ in a booklet by that name.)

Why would you want to engage in such a practice? Your purpose could be contemplative, meditative, spiritual, scientific, philosophical or all or none of the above. Peirce engaged in his phenomenology, or phaneroscopy, because he was a logician and needed to clarify what was truly elementary about anything that anyone could think, sense or experience. For me, it’s a way of getting back in touch with what’s actually happening all around and within me, instead of taking most of it for granted, as we all habitually (and necessarily) do. Writing about it like this doesn’t make my experience accessible to you, but it might suggest ways of paying closer attention to your own experience. That’s what i hope for, anyway.