I should like to write a little book on ‘The Conduct of Thoughts’ in which the introductory chapter should introduce the reader to my existential graphs, which would then be used throughout as the apparent subject, the parable or metaphor, in terms of which everything would be said,— which would be far more scientific than dragging in the “mind” all the time, in German fashion, when the mind and psychology has no more to do with the substance of the book than if I were to discourse of the ingredients of the ink I use. If the average logician had anything like the comparatively exalted understanding of an average earth-worm, such a book would not be needed. The mere description of Existential Graphs would [be] sufficient.

Existential graphs are to be conceived as scribed upon the different leaves of a whole book. This whole book represents the thought (upon a given subject) of one mind. Each leaf represents a single stage of that thought. In the beginning, the successive leaves must represent strictly successive states of thought—I speak of, logical succession. But afterward when the minute anatomy of the thinking process has been mastered by the reader one can successively enlarge the intervals of development between the states of thought that successive leaves represent.

The blank leaf itself is the quasi-mind. I almost despair of making clear what I mean by a “quasi-mind;” But I will try. A thought is not per se in any mind or quasi-mind. I mean this in the same sense as I might say that Right or Truth would remain what they are though they were not embodied, & though nothing were right or true. But a thought, to gain any active mode of being must be embodied in a Sign. A thought is a special variety of sign. All thinking is necessarily a sort of dialogue, an appeal from the momentary self to the better considered self of the immediate and of the general future. Now as every thinking requires a mind, so every sign even if external to all minds must be a determination of a quasi-mind. This quasi-mind is itself a sign, a determinable sign. Consider for example a blank-book. It is meant to be written in. Words written in that in due order will have quite another force from the same words scattered accidentally on the ground, even should these happen to have fallen into collections which would have a meaning if written in the blank-book. The language employed in discoursing to the reader, and the language employed to express the thought to which the discourse relates should be kept distinct and each should be selected for its peculiar fitness for the purpose it was to serve. For the discoursing language I would use English, which has special merits for the treatment of logic. For the language discoursed about, I would use the system of Existential Graphs throughout which has no equal for this purpose.

I use the word “Sign” in the widest sense for any medium for the communication or extension of a Form (or feature). Being medium, it is determined by something, called its Object, and determines something, called its Interpretant or Interpretand. But some distinctions have to be borne in mind in order rightly to understand what is meant by the Object and by the Interpretant. In order that a Form may be extended or communicated, it is necessary that it should have been really embodied in a Subject independently of the communication; and it is necessary that there should be another subject in which the same form is embodied only in consequence of the communication. The Form (and the Form is the Object of the Sign), as it really determines the former Subject, is quite independent of the sign; yet we may and indeed must say that the object of a sign can be nothing but what that sign represents it to be. Therefore, in order to reconcile these apparently conflicting truths, it is indispensable to distinguish the immediate object from the dynamical object.

The same form of distinction extends to the interpretant; but as applied to the interpretant, it is complicated by the circumstance that the sign not only determines the interpretant to represent (or to take the form of) the object, but also determines the interpretant to represent the sign. Indeed in what we may, from one point of view, regard as the principal kind of signs, there is one distinct part appropriated to representing the object, and another to representing how this very sign itself represents that object. The class of signs I refer to are the dicisigns. In “John is in love with Helen” the object signified is the pair, John and Helen. But the “is in love with” signifies the form this sign represents itself to represent John-and-Helen's Form to be. That this is so, is shown by the precise equivalence between any verb in the indicative and the same made the object of “I tell you.” “Jesus wept” = “I tell you that Jesus wept.”

No object can be denoted unless it be put into relation to the object of the commens. A man, tramping along a weary and solitary road, meets an individual of strange mien, who says, “There was a fire in Megara.” If this should happen in the Middle United States, there might very likely be some village in the neighborhood called Megara. Or it may refer to one of the ancient cities of Megara, or to some romance. And the time is wholly indefinite. In short, nothing at all is conveyed, until the person addressed asks, “Where?”—“Oh about half a mile along there” pointing to whence he came. “And when?” “As I passed.” Now an item of information has been conveyed, because it has been stated relatively to a well-understood common experience. Thus the Form conveyed is always a determination of the dynamical object of the commind. By the way, the dynamical object does not mean something out of the mind. It means something forced upon the mind in perception, but including more than perception reveals. It is an object of actual Experience.

The system of Existential Graphs (at least, so far as it is at present developed) does not represent every kind of Sign. For example, a piece of concerted music is a sign; for it is a medium for the conveyance of Form. But I know not how to make a graph equivalent to it. So the command of a military officer to his men: “Halt!” “Ground arms!” which is interpreted in their action, is a sign beyond the competence of existential graphs. All that existential graphs can represent is propositions, on a single sheet, and arguments on a succession of sheets, presented in temporal succession.

If you take in all that I have said and what I am just about to say, you will begin to get an insight into the marvellous perfection and minute truth and profundity of this system.

Logicians who analyze a proposition into “terms” and a “copula” are guilty of overlooking the truth I have just enunciated, that it is out of the nature of things for an object to be signified (and remember that the most solitary meditation is dialogue), otherwise than in relation to some actuality or existent in the commend. A common noun is by no means an indispensible part of speech. Indeed, there are few languages, outside the modern European languages, in which this part of speech is so fully developed as in them. All the Aryan languages have this part of speech. But in Greek one can say ‘A man is an animal’ without using any verb; and this shows that the nouns themselves have a trace of the verb-character. In the Shemitic languages almost all nouns have the form of derivatives of verbs. In Arabic and (in a somewhat different way) in Old Egyptian the “substantive verb” may be replaced by a pronoun, which proves that the nouns themselves have a share of predicative force. In most of the non-inflectional languages there are no fully developed common nouns, and a language like Basque (which has few verbs) is most exceptional. My analysis of ‘A man is an animal’ is as follows. I am looking, at present, at this paper. Then, to me, the proposition is: ‘Something is coexistent at once with this paper and with Something that is at once a man and is an animal’. Now if I throw off the coexistence, (the being at once this and that), the paper, and the man, what will remain will [be] 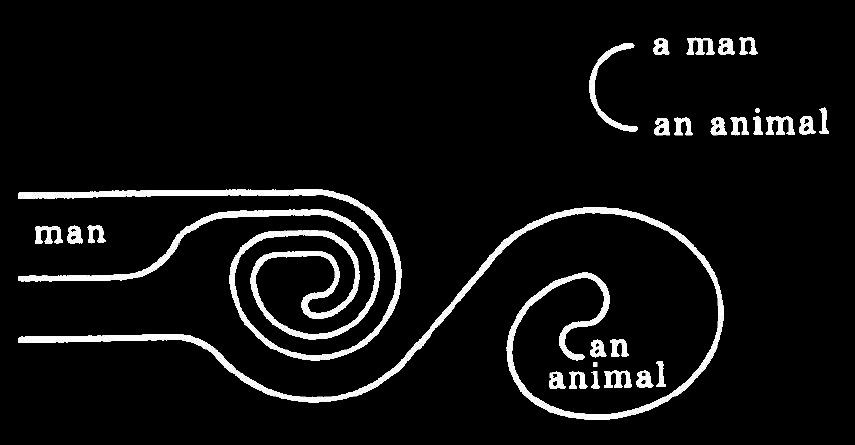 But Note Well that as yet the question whether a proposition to be asserted is to be simply scribed on that sheet or how otherwise it is to be attached to the sheet [has not been decided?].

I insert in this diagram nothing [about?] the paper, because that is sufficiently represented by the thing being written on this paper, which shows l must be thinking that the man is in the same universe as the paper. However I could scribe

teridentity cannot be formed out of binidentity _________ where two lines merely make one longer line.

Here let me point out what we mean in logic by equivalence and by composition.

If one rheme, or verb, would be true in every conceivable case in which the other would be true, and conversely, then and only then those two verbs are logically equivalent. For logic has in view only the possible truth and falsity of signs.

It follows in the first place that every line of identity ought to be considered as bristling with microscopic points of teridentity; so that ___________ when magnified shall be seen to be

In the second place it follows that using “coexistence” in such a sense that it is mere otherness, then since if anything is not coexistent with itself the same is equally true of anything else, to say that __________ a bird, i.e. that there is a bird, is equivalent to

Whence it follows that a very approprite symbol for tercoexistence, that is for

is simply any blank point on the sheet so that

But the latter mode of writing is somewhat of the nature of an abridgement. 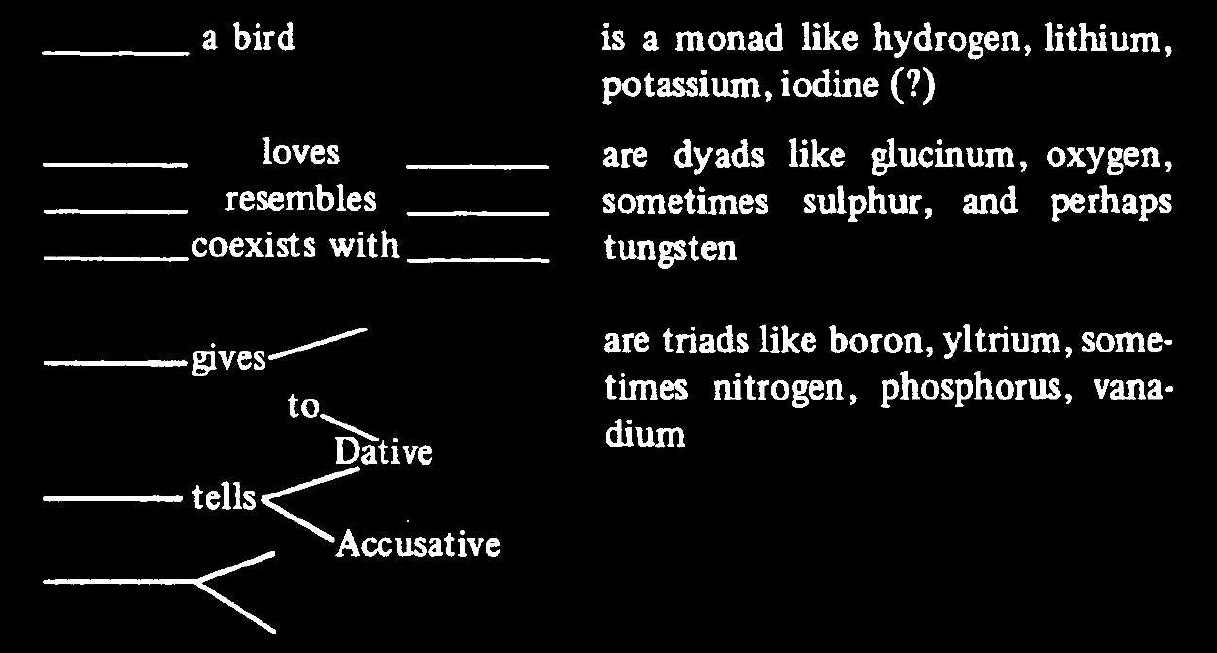 All tetrads etc are compounds. There are no medads like argon and xenon except the absolute Truth. But loosely we may take a complete proposition for a medad.

The only way in which concepts can be connected or compounded (without the addition of other concepts) is by bringing the lines of identity attached to them into abuttal, or by something which is virtually that. For we have seen that

So far all the conventions of the system seem almost forced upon us. But now we come to the sole feature of the system which may be strongly suspected of being arbitrary. Namely, all the objects of graphs, or propositions, are of two classes. Every object is either asserted as an actuality, i.e., as an object of positive knowledge or it is merely suggested as a possibility, or as an object of ignorance i.e., an object of whose existence the proposition written leaves us ignorant. Let us write the objects of knowledge on the recto of the sheet and appropriate the verso to indications of objects of ignorance.

But our objects of knowledge are limited. We cannot insert one without some evidence. We can erase any without incurring responsibility.

Our objects of ignorance are an infinite multitude and we cannot exclude any without evidence while we can insert any we like, since it is merely to represent ourselves as ignorant.