Remembrance Day, as we call it in Canada, is intended mainly for honoring the veterans of what we call the “World Wars.” To observe it properly, we ought to see those wars in their context – which is also the context of the 26th UN Climate Change Conference of the Parties (COP26) now winding up (or down) in Glasgow. To give us a glimpse of it, George Monbiot “crudely summarized” the story of the past 500 years in his blog post yesterday. That history has brought us to the ecological, economic, energy and equity crises we face today, and living through them will be a far greater challenge than living through those wars, devastating as they were. We have less than a decade to turn that story around.

There’s another kind of remembrance that we ought to engage in every day. In Turning Signs i call it mindfulness.

We who live in the “wealthy nations” don’t have all the time in the world to mend our unjust and ruinous ways. But we have all the world in the time, if we live it mindfully.

In essence, all things in the entire world are linked with one another as moments. Because all moments are the time being, they are your time being.

Yesterday was Canada Day, but few of us felt like celebrating, after the discovery that hundreds (probably thousands) of Indigenous children lie buried in unmarked graves near the residential schools where they died. We had heard the stories told by survivors of the horrors of those government-sanctioned institutions, but this was even worse. Will this cause Canada as a whole to recognize the systemic racism that has plagued our history right up to the present, and to make an honest effort to eradicate it? Time will tell.

Time is already telling the horror story of global heating. Hundreds have died in the past week under the heat dome in Western Canada, where a town in British Columbia hit the highest temperature ever recorded in Canada, just under 50 C. (over 120 Fahrenheit). Now the same town has been almost wiped out by one of the forest fires raging in the region. Will this convince Canadians that climate change is a real emergency? Parliament has just passed Canada’s Net-Zero Climate Accountability Act (Bill C-12), which finally sets some near-term targets for curbing greenhouse gas emissions, and even includes provisions for monitoring and enforcement, so that could be seen as a turning point. But that point should have been reached decades ago, here and elsewhere, so it’s hard not to feel that this progress is too little, too late.

Meanwhile on Manitoulin Island we’ve had an unusually cool June; yesterday’s high was about 19 C. Normal weather patterns are being disrupted in all directions. Even closer to home, my blog posting has been interrupted by another writing project (for publication elsewhere). Now I’m back to revision toward a 2nd edition of Turning Signs, and have now finished (or refinished) Chapter 16. Does it contribute anything to the the global transformation I’ve been blogging about for years now? I think it does, but only for readers who can relate it to their experience, and especially to their practice of living this time, which is the subject of the chapter.

I can’t resist copying here a couple of quotes from near the end of the chapter. One is by C.S. Peirce, about the “spiritual reality” of a human:

by action, through thought, he grows an esthetic ideal, not for the behoof of his own poor noddle merely, but as the share which God permits him to have in the work of creation.

For me at least, this “esthetic ideal” is not some static image that one aims to achieve in the future, but a way of living the time now into the future. Eihei Dogen comes as close to expressing it in words as anything I’ve come across:

So is this moment a turning point? Yes, but not a discontinuity in what Dogen calls continuous practice. The earth and all beings continue to turn. 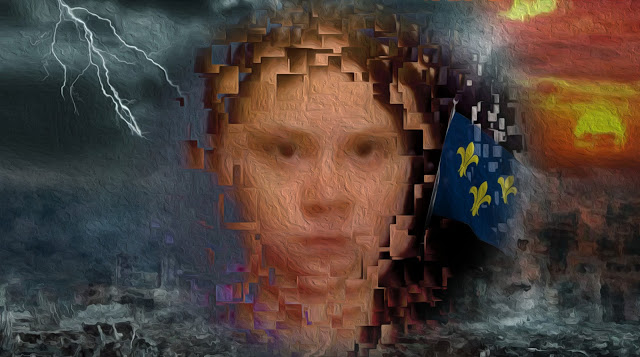 The winter solstice is here at last. It’s comforting to know (as well as we can know anything about the future) that tomorrow the northern hemisphere will begin tilting back towards the sun and the daylight hours will begin to increase. Our solar-powered life here on Manitoulin Island will become more secure; by February we will hardly need our generator at all to keep our batteries charged up. In the meantime we can enjoy tramping about the woods with our snowshoes, or watching the chickadees and goldfinches at the feeder.

The global news is not so good. The climate summit in Madrid, COP25, was an abject failure, with the big polluters blocking any attempt at a concerted international effort to significantly reduce greenouse gas emissions. We can expect no genuine leadership to come from the top levels of our governments. That leaves it up to us at the local level to build up our relilience as we deal with the ongoing emergencies. As for instance the Dutch agroecology movement is doing.

The more we humans carry on consuming our context as we have been, the less likely we are to manage the consequences. For instance, where will the hundreds of millions of climate refugees go in the coming decades – now that we have already exceeded the carrying capacity of the planet and driven so many other species to extinction? One journalist in Madrid was musing about all this, and about the Greta phenomenon, as he watched the negotiations fall apart.

My own musing is this: whether we manage to “manage” or not, i hope we can at least wake up from the dream of “progress” and live our time wholeheartedly. I find more resonance than ever in Thoreau’s words from Walden:

God himself culminates in the present moment, and will never be more divine in the lapse of all the ages. And we are enabled to apprehend at all what is sublime and noble only by the perpetual instilling and drenching of the reality that surrounds us.… Let us spend one day as deliberately as Nature … Be it life or death, we crave only reality.

Every part of the world that has invested heavily in renewables and efficiency has found these sectors to be much more powerful job creators than fossil fuels. When New York State made a commitment to get half its energy from renewables by 2030 (not fast enough), it immediately saw a spike in job creation.

The accelerated time line of the US Green New Deal will turn it into a jobs machine. Even without federal support—indeed, with active sabotage from the White House—the green economy is already creating many more jobs than oil and gas. According to the 2018 US Energy and Employment Report (USEER), jobs in wind, solar energy efficiency, and other clean energy sectors outnumbered fossil jobs by a rate of three to one. That is happening because of a combination of state and municipal incentives and the plummeting costs of renewables. A Green New Deal would take the industry supernova while ensuring that the jobs have salaries and benefits comparable to those offered in the oil and gas sector.

There is no shortage of research to support this …

Unfortunately, the recent federal election in Canada shows very little popular support for the Green New Deal, especially in those parts of the country that need it most for job creation. Both the Green and New Democratic Party platforms called for accelerating the transition from oil dependence to renewable energy by eliminating subsidies to the oil industry and redirecting government money to build up wind and solar infrastructure and retrain workers for it. But neither party got many votes in Alberta or Saskatchewan; most of the votes there went to the Conservatives, who are more interested in conserving the profitability of oil extraction than in conserving an environment that is healthy for everybody to live in.

This leaves most of the oil patch workers in dead-end jobs: either those jobs will disappear because the green shift will resolve to keep the oil in the ground, as required to bring down carbon emissions – or climate change will degrade the ecosystems to the point where the economy will collapse, bringing oil workers down with it. Most likely the actual outcome will be somewhere between those two extremes, but the oil patch seems to be in deep denial about both scenarios. Is that because people generally resist changes in how they make a living, instead of embracing new opportunities? Or is it because the Big Oil executives are using propaganda effectively to prevent workers from seeing the reality of their situation? Again, maybe it’s both.

Anyway, neither the Liberal minority government nor the Conservatives show any sign of supporting the kind of “new deal” that would improve the lives of workers in the coming decades. It will take a massive social movement to overcome all this inertia. This is perhaps the major point of Naomi Klein’s new book, which I can recommend to anyone with an interest in the transition we are now going through, and how our lives will be different when today’s teenagers are running the show.