This statement by Charles S. Peirce is from his Lowell Lecture 8 of 1903 – and more specifically, from a little meditation on ethics and esthetics within that lecture:

The question is what theories and conceptions we ought to entertain. Now the word “ought” has no meaning except relatively to an end. That ought to be done which is conducive to a certain end. The inquiry therefore should begin with searching for the end of thinking. What do we think for? What is the physiological function of thought? If we say it is action, we must mean the government of action to some end. To what end? It must be something good or admirable, regardless of any ulterior reason. This can only be the esthetically good. But what is esthetically good? Perhaps we may say the full expression of an idea? Thought, however, is in itself essentially of the nature of a sign. But a sign is not a sign unless it translates itself into another sign in which it is more fully developed. Thought requires achievement for its own development, and without this development it is nothing. Thought must live and grow in incessant new and higher translations, or it proves itself not to be genuine thought.

But the mind loses itself in such general questions and seems to be floating in a limitless vacuity. It is of the very essence of thought and purpose that it should be special, just as truly as it is of the essence of either that it should be general. Some writers have called the circle beautiful: but it has no features: it is expressionless. No curve can be very beautiful, because the thought it embodies is too meagre. But as curves go, bicyclic quartics are as a matter of fact pleasing; and I think the reason is that they have something of the perfect regularity of the circle, with a continuity of a kind which developes special features. Hogarth’s line of beauty 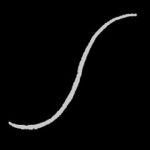 is the simplest case of a special feature, a singularity, as it is called by geometers, which the law of the continuity itself engenders, without destroying the continuity. All this may seem to be very foreign to logic, and perhaps it is so. Yet it illustrates the point that the valuable idea must be eminently fruitful in special applications, while at the same time it is always growing to wider and wider alliances.

This appears to be one more example of Peirce’s recurring idea that ‘symbols grow.’ It also serves as an application of the creative tension (or tention) which is found to be a core attibute of both life and semiosis in Turning Signs. In this case, the tension is between the generality and the specificity of thought.