As the time is not other than appearing, appearing is the arrival of time. What is it that appears? Appearing appears.

You can hide from the sun; but, as Heraclitus asked,

How can anyone hide from that which never sets?

This is a complement to the question: How can anyone attend to that which is always there? How can you look for what is never missing?

Of passing many sentences
and making many periods
there is no point.

… or as the King James Version has it, “the kingdom of God is within you.” Its coming is unobservable, like the time you are living in. We cannot observe spacetime: we can only observe differences or changes in the current state of things. Can you direct your attention to the ground of your attention (and your intentions)?

In the Gospel of Thomas, the question was put to Jesus by his disciples:

His disciples said to him, “When will the kingdom come?”
“It will not come by watching for it. It will not be said, ‘Look, here it is,’ or ‘Look, there it is.’ Rather, the Father’s kingdom is spread out upon the earth, and people do not see it.”

At another time they asked him a very similar – or is it the same? – question:

His disciples said to him, “When will the rest for the dead take place, and when will the new world come?”
He said to them, “What you look for has come, but you do not know it.”

In Greek/Coptic, the word for ‘rest’ here is anapausis. Some say this is a mistake for anastasis, which means ‘resurrection’ – another event connected to the coming of the Kingdom and the new world. But perhaps ‘rest’ is just the other side of the coin of ‘resurrection’ – both beneath our knowledge, like the water underground.

now appearing under your nose and between your eyes:

The opening words of the Tao Te Ching (in pinyin, Daodejing) as translated by Gia-Fu Feng and Jane English:

Ames and Hall, in their edition, offer an intimological account of ‘Daoist naming’ which seems well suited to anticipatory systems and their developing relationships with other subjects:

Naming as knowing must have the provisionality to accommodate engaged relationships as in their “doing and undergoing” they deepen and become increasingly robust. Such knowing is dependent upon an awareness of the indeterminate aspects of things. The ongoing shaping of experience requires a degree of imagination and creative projection that does not reference the world as it is, but anticipates what it might become.

In the Classic of Mountain and Seas, an ancient “gazetteer” that takes its reader on a field seminar through unfamiliar lands, the calls of the curious animals and birds that are encountered are in fact their own names. They (like most things) cry out what they would be. And having access to the “name” of something is not only a claim to knowing it in a cognitive sense, but more importantly, to knowing how to deal with it. Naming is most importantly the responsiveness that attends familiarity. Hence such knowing is a feeling and a doing: it is value-added. It is naming without the kind of fixed reference that allows one to “master” something, a naming that does not arrest or control. It is a discriminating naming that in fact appreciates rather than depreciates a situation.

There is another aspect to the hope placed in randomness: to a program that exploits randomness, all pathways are open, even if most have very low probabilities; conversely, to a program whose choices are always made by consulting a fixed deterministic strategy, many pathways are a priori completely closed off. This means that many creative ideas will simply never get discovered by a program that relies totally on ‘intelligence’. In many circumstances, the most interesting routes will be more likely to be discovered by accidental exploration than if the ‘best’ route at each junction is invariably chosen.

If the fool would persist in his folly he would become wise.

Only that day dawns to which we are awake. There is more day to dawn. The sun is but a morning star.

We still and always want waking.

And then. Be old. The next thing is. We are once amore as babes awondering in a wold made fresh where with the hen in the storyaboot we start from scratch.

It is only by taking fresh looks at situations thought already to be understood that we come up with truly insightful and creative visions. The ability to reperceive, in short, is at the crux of creativity.

The sacred text is what the sacred river is currently reading, the streambed of consciousness.

(Stoop), if you are abcedminded, to this claybook, what curios of signs (please stoop) in this allaphbed! Can you rede (since We and Thou had it out already) its world? It is the same told of all.

Drawing nearer to take our slant at it (since after all it has met with misfortune while all underground), let us see all there may remain to be seen.

The act of meaning the sacred text involves collision and collusion with the limits of language.

Beware lest ye be hindered by the veils of glory from partaking of the crystal waters of this living Fountain.

But give glad tidings to those who believe and work righteousness, that their portion is Gardens, beneath which rivers flow. Every time they are fed with fruits therefrom, they say: “Why, this is what we were fed with before,” for they are given things in similitude; and they have therein companions pure (and holy); and they abide therein (for ever). 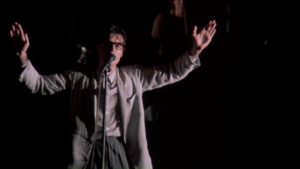 He is cured by faith who is sick of fate. The prouts who will invent a writing there ultimately is the poeta, still more learned, who discovered the raiding there originally. That’s the point of eschatology our book of kills reaches for now in soandso many counterpoint words. What can’t be coded can be decorded if an ear aye sieze what no eye ere grieved for. Now, the doctrine obtains, we have occasioning cause causing effects and affects occasionally recausing altereffects. Or I will let me take it upon myself to suggest to twist the penman’s tale posterwise. The gist is the gist of Shaum but the hand is the hand of Sameas.

— David Byrne, Talking Heads, ‘Once in a Lifetime’